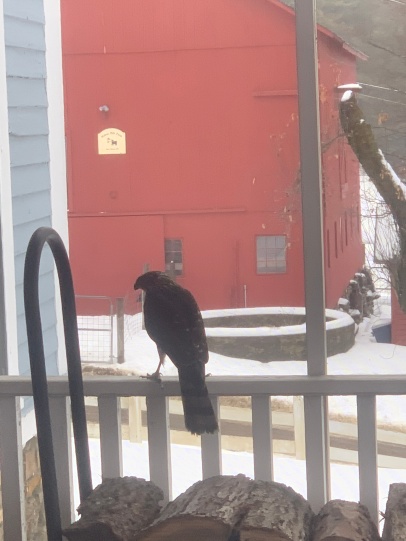 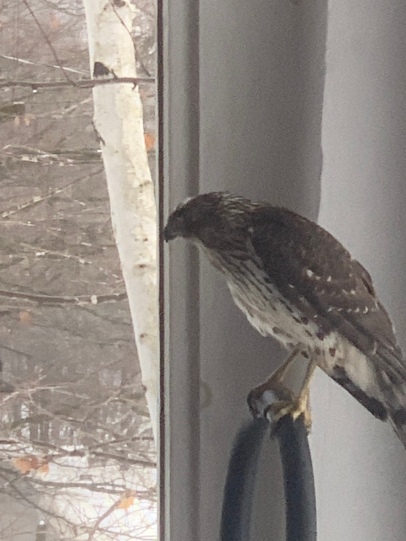 A terrific commotion brought me downstairs last week to find a Cooper’s Hawk trapped inside the screened in area of our front porch.  He had flown right through the screened door, tearing the netting into two equal half which were now flapping sadly in the wind.  Hawks of every variety are a common sight here, they love swooping up and down the valley, scanning for prey.

They are just as wary of me as I am of them, so seeing one this close was an amazing experience.  For quite some time, he attempted to fly through various parts of the porch, throwing the weight of his body against the screens in the hopes of getting back out.  Growing increasingly frustrated with each failed attempt, he perched at last on the wood rack, looking about with great agitation.  To  my surprise, I could see that he was panting from all the exertion, much like a dog does – tongue out, mouth wide open, a fierce panic in his eyes.

By this time, my dog Sophie had arrived to inspect the situation, and had begun barking loudly.  Thinking that it was best to leave the poor fellow to figure his way out in quiet peace, Sophie and I retreated to another part of the house.   When we returned to check a few hours later, I was thrilled to see that he had managed to escape, leaving behind just a few rents in the screens, and a giant blob of poop.

The Christmas sparrow in Collins’ poem below came to mind when I remembered what it felt like to watch that trapped hawk, to imagine what it must have felt confined in a space where he could feel the wind and yet not fly away.

The first thing I heard this morning
was a soft, insistent rustle,
the rapid flapping of wings
against glass as it turned out,

a small bird rioting
in the frame of a high window,
trying to hurl itself through
the enigma of transparency into the spacious light.

A noise in the throat of the cat
hunkered on the rug
told me how the bird had gotten inside,
carried in the cold night
through the flap in a basement door,
and later released from the soft clench of teeth.

Up on a chair, I trapped its pulsations
in a small towel and carried it to the door,
so weightless it seemed
to have vanished into the nest of cloth.

But outside, it burst
from my uncupped hands into its element,
dipping over the dormant garden
in a spasm of wingbeats
and disappearing over a tall row of hemlocks.

Still, for the rest of the day,
I could feel its wild thrumming
against my palms whenever I thought
about the hours the bird must have spent
pent in the shadows of that room,
hidden in the spiky branches
of our decorated tree, breathing there
among metallic angels, ceramic apples, stars of yarn,

its eyes open, like mine as I lie here tonight
picturing this rare, lucky sparrow
tucked into a holly bush now,
a light snow tumbling through the windless dark.