It being our first Thanksgiving at the farm, I prepared for the day especially well.  Around these parts, where the nearest supermarket is forty minutes away, that meant making sure that whatever we needed for our feast was on hand.

Things went awry at breakfast, when we discovered that the kids had been in an extra eggy mood, which left us eggless.

They were also in the mood for extra helpings of bacon, which left us without any to bard the turkey.

Speaking of which, we had left the turkey on our porch since there was no space in our refrigerator to house the bird.  We had not thought to remember that below zero degree temperatures had been predicted for the night before Thanksgiving, which left us with a frozen solid bird.

So…Thanksgiving day became an exercise in adjusting plans, and settling for the less than perfect.  It turned out, no one noticed or minded.  After years and years of over thinking  the perfect feast, I just enjoyed it for what it was – a chance to be together with our family.  I think this poem captures something of that:

The thing about the huge platter
of sliced celery, broccoli florets,
and baby tomatoes you had  arranged
to look like a turkey with its tail fanned out
was that all our guests were so intimidated
by the perfection of the design
no one dared disturb the symmetry
by removing so much as the nub of a carrot.

And the other thing about all that
was that it took only a few minutes
for the outline of the turkey to disappear
once the guests were encouraged to dig in,
so that no one else would have guessed
that this platter of scattered vegetables ever bore
the slightest resemblance to a turkey
or any other two- or four-legged animal.

It reminded me of the sand mandalas
so carefully designed by Tibetan monks
and then just as carefully destroyed
by lines scored across the diameter of the circle,
the variously colored sand then swept
into a pile and carried in a vessel
to the  nearest moving water and poured in–
a reminder of the impermanence of art and life.

Only, in the case of the vegetable turkey
such a reminder was never intended.
Or if it was, I was too busy slicing up
even more vivid lessons in impermanence
to notice. I mean the real turkey minus its head
and colorful feathers, and the ham
minus the pig minus its corkscrew tail.

P.S.  I had great fun looking at veggie platters such as the one Collins describes – this was my favorite, a regal-and-yet-resigned-to-its-fate looking bird. 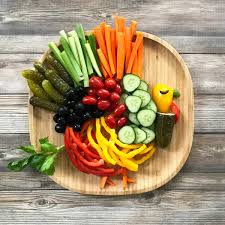