The sky is a changeable creature, no matter what the season.  Blazing sunshine at ten on a summer morning can just as easily turn into sunless stone grey by noon.  But, there is something about the changeability of winter sun that I’ve learned to pay attention to here at the farm.  Maybe this is because winter sunshine has been somewhat rare this season, maybe this is because I can see every sunrise from my bedroom window, or maybe this is because I am just now learning how to pay attention to such things.  Whatever the reason, contemplating the morning sky has become a daily ritual.

Today, for instance, began with a dull grey light creeping upward on the horizon.  The last thought I’d had before I’d fallen asleep was of the snow storm predicted for the next day, which was also the first thought I’d had upon waking up.  Sophie and I stood by the window, trying to muster the strength of character to face the icy snow and single digit temperatures that are the companions to our early morning walks.

And then, with the faintest hint of pink, clouds parted to this: 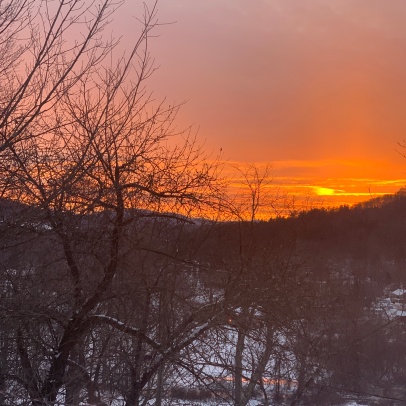 Right after taking that second photograph, we ran downstairs to throw on our winter gear (well, my winter gear) and get outdoors to experience the sky in person.  But, by the time I’d opened the back door, that sky was back to a dreary grey.   We walked in it, nevertheless, glad to have still-fresh memories of its earlier incarnation.