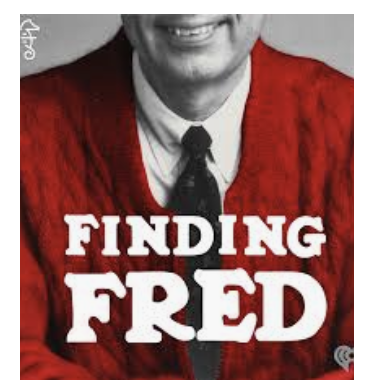 Podcasts have become somewhat of an addiction for me.  I love the changing formats, the imaginative production tweaks, and, above all, the vast scope of  topics that range from the silly to the wise.  Podcasts make barn chores go by so much more quickly.

Discovering a new series to listen to has become a daily quest; but it was an especially lucky day when I chanced upon Finding Fred.  Mr. Rogers was a boon to me as a parent.  His quiet ways and thoughtful approach to children and childhood were such a wonderful antidote to what passes for children’s television.  My children loved him, and so did I.

It’s been so interesting to listen to this podcast, to unpack the many layers of the man, his philosophy, and the way that philosophy permeated his work.  Even today, just hearing the opening bars of the show’s theme song is enough to make me feel calmer instantly.

The last episode invited listeners to call in and share “how someone in your life had showed you what it means to be a helper”.   Being phone phobic, I knew I would not be calling in.  But I instantly knew who that helper had been: Dr. B.

He was my step mother’s colleague, a professor at the same upstate New York university.  He had a lovely family, a wife as kind and funny as he was, and two adorable children.  We, my stepmother, step sister, and step brother, were invited over to their home from time to time.  Once, we spent a weekend at their camp on Lake George.  The normality of their home, their interactions with each other, the way they approached life with confidence and hope, were what I was drawn to the most.

I needed to see all of that because my own home life was neither normal nor hopeful.  My stepmother was a conglomeration of all the wicked stepmothers in every fairy tale I’d read about before she entered my life.  It would be another two years before my father joined us in America, and this gave my stepmother the freedom to intensify her abuse.  Freedom made her bolder, and she grew careless – there were often visible signs of abuse.

Apparently, no one noticed, because no one, not a teacher, counselor, peer, or neighbor said a word about what they saw.  No one, that is, except Dr. B.  He came to collect me from school one day, and drove me to his house.  On the way, he explained that he had seen enough to know that I was danger, and that he and his wife had agreed to take me in and keep me safe.  Doing so put him in a most awkward situation at the university, my stepmother was a full professor and he did not, as yet, have tenure.  She had both greater power and a vindictive nature.  Clearly, helping me was not a good career move.

Nevertheless, Dr. B. showed up to be my helper.   And, in doing so, he showed me how to help myself.

We lost touch in the many years that followed.    I called just once, after the birth of my first child.  It’s hard to say thank you when the thanks owed is for something so immense, but I remember trying.  He listened for a bit, and then cut me off.  The only way for me to show my gratitude, he said, was to be there for some one else when the opportunity presented itself to me.   Soon after, I heard that he had passed away from cancer.

Listening to Finding Fred reminded me of what I’d learned from Mr. Rogers.  I drew from those lessons in parenting and in teaching .  And, every day of my teaching life, I remembered Dr. B., and tried to live up to his example of what it is to be a helper.

“When I was a boy I would see scary things in the news, my mother would say to me “Look for the helpers. You will always find people who are helping. To this day, especially in times of disaster I remember my  mother’s words and I am always comforted by realizing that there are still so many helper-so many caring people in this world.”

One thought on “Finding Fred”